Europa Nostra's President, HRH the Prince Consort of Denmark, and Mr Harald Hartung, Head of Culture Unit at the European Commission, presented the awards to 41 laureates from 18 countries.

BDP won a European Union Prize for Cultural Heritage/Europa Nostra Award for the remarkable achievement of restoring and enhancing an international concert hall whilst still in use and for the ingenious provision of service requirements, thereby releasing space for the public's enjoyment.

The renovation of the Royal Albert Hall is the first comprehensive overhaul of this unique concert hall since it opened in 1871. To achieve this while the Hall continued to host over 300 events a year, work was divided into 30 discreet projects spread over a period of nine years.

The renovation ensures the Hall's long-term viability by improving facilities for audiences and performers and making it easier to put on shows. Within the Auditorium, all fixed seating was rebuilt to improve comfort, leg-room and access. The elaborate plasterwork of the Cove around the base of the Dome was reinstated as part of measures to improve the acoustics, and the Dome itself was completely re-glazed. Obsolescent services were renewed and universal access was provided to all parts of the Hall. New basements were excavated below the terraces south of the Hall with a service yard directly accessible to the stage and kitchen, new dressing rooms, workshops and plant rooms. This released space within the Hall for additional public foyers, and also made it possible to ventilate the Auditorium.

Above ground, the original terraces and the Memorial to the Exhibition of 1851 were reinstated and a new South Porch was built of load-bearing terracotta and brick to match the original construction. Everywhere the historic fabric of the building was renewed.

This European Heritage Awards Scheme was launched in 2002 by the European Commission, as part of the implementation of the EU Culture 2000 Programme. Europa Nostra was selected to run this Awards Scheme, on the basis of its long experience in publicly recognising - on a European level - individual or joint excellence in the heritage field. The aims of this Scheme are twofold: to promote high standards and quality skills of conservation practice and to stimulate the trans-frontier exchanges in the heritage field. 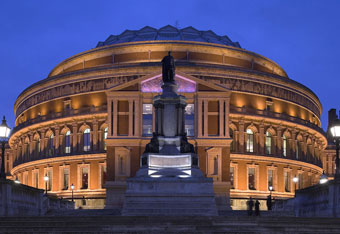