Liverpool One Nominated For Stirling Prize

BDP’s masterplan for Liverpool ONE, the new 42-acre retail district in the heart of Liverpool city centre, was today nominated for the 2009 RIBA Stirling Prize.

The Stirling Prize shortlist has normally only featured buildings and physical projects considered to be of great architectural significance. In nominating BDP’s masterplan they have broken with tradition and have put the Liverpool One scheme on a par with iconic structures for the first time in the prize’s 13 year history. BDP’s scheme was also the first masterplan to ever win a North West regional RIBA award (a prerequisite for consideration for the Stirling) earlier in the year.

Stirling judges said the plan had “single-handedly reversed the fortunes of the city by bringing a new social and economic vibrancy to what was 42 acres of derelict but historic buildings at its heart.  The result is a vibrant and economically successful retail, leisure and mixed-use quarter – an entirely revitalised city centre that now connects properly with the Docks. BDP set down generous public space networks and rigorous yet flexible design briefs and have worked with a broad range of architects to evolve the plan and deliver buildings of a very high quality.”

The 42 acre site itself consists of  1.4 million sq. feet of retail space, a 14-screen multiplex cinema and 230,000 sq. feet of restaurants, cafes and bars in addition to 600 new apartments, two hotels, offices, a five-acre park and a transport interchange. BDP’s challenge was how to seamlessly integrate all these features including the harmonious linking of nearly 40 new buildings designed by over 20 different architects.

Another challenge was linking Liverpool One’s new boundaries with existing districts such as the bohemian Ropewalks area and the world famous Mersey waterfront. BDP had to ensure that the individual character of these areas was not compromised by Liverpool One’s 42 acre footprint.

Terry Davenport - Retired 2010, head of BDP’s northern retail team and the man behind the Liverpool One masterplan, said:  “Being responsible for the first ever masterplan to make the Stirling Prize shortlist is a fantastic achievement and a testament to the vision, talent and skills of the entire BDP team.

“The fact that the RIBA judges have chosen to put a masterplan on a par with some of the world’s most impressive new buildings also reflects that great architectural design isn’t solely about physical structures. Masterplanning takes in a broad range of disciplines and plays a key role in the delivery of sustainable urban regeneration.

“It also helps build better and more coherent communities and, if done well, can genuinely make a difference to the quality of people’s lives. I’m therefore thrilled that this has been recognised through being shortlisted for the UK’s top architectural award.”

Tony McGuirk - Retired 2014, originally from St Helens, said:
“Being nominated for the Stirling Prize is a great thing for any architect. The selection of Liverpool One demonstrates a shift towards architects and designers who see ‘placemaking’ as key to our urban development and culture. Liverpool One is a grand stitching exercise on a macro-scale, drawing together previously isolated elements of the city.

“As someone who spent much of his time in Liverpool as a 1960s teenager I can testify that the central district felt like it was on the fringes of the city and not at the heart of it.  You could also sense that the once majestic Albert Dock was slipping into decline.

“Fortunately the city’s fathers resisted a monstrous, modernist development that was proposed in the early seventies and thirty years on BDP, together with developer Grosvenor, has created a joined up, sustainable and vibrant Liverpool One.”

Developer Grosvenor was also singled out for praised by the Stirling panel. They said: “That one project has been able to deliver sufficient critical mass to regenerate a city of such importance is the result of an outstanding client with vision and commitment to delivering design excellence and urban coherence.”
The project is also an exemplar of collaboration with many teams contributing to the successful delivery of the masterplan vision. These included a range of local, national and international architects in addition to several teams across BDP. A particularly close association was formed between BDP and Pelli Clarke Pelli on the masterplanning, design and ultimate delivery of the 5 acre Chavasse Park.

This is second time BDP have been shortlisted for the Stirling Prize in recent years. In 2002 they were nominated for their groundbreaking education and residential development, Hampden Gurney School, in Westminster.
The RIBA Stirling Prize will be announced in London on October 17th and the ceremony will broadcast live on Channel 4.

Team
BDP’s Liverpool One Executive Team was instrumental in the delivery of the whole project, and worked with architects Allies and Morrison to complete 13B Liverpool One, the central part of the successful masterplan.

BDP was also lighting designer and landscape architect on the Liverpool One project.

Other Liverpool One Architectural Teams: 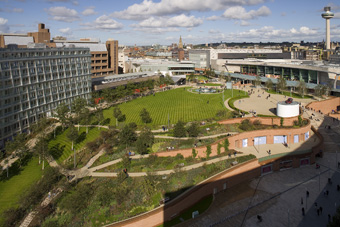