The inaugural Sunday Times International Track 100, published yesterday (11 July 2010) ranks private companies by foreign sales growth over their latest two financial years and reveals that British creativity, engineering and experience are still in demand all over the world.

BDP, placed at 46 out of 100, is one of six entries from the construction sector on the table.  The practice’s projects include  urbanism masterplans in India and retail developments in China International sales have increased by 74% a year over two years to £16.5m in 2009.

Of BDP the entry states
"In five years (BDP) has gone from working in five countries to 30, including Abu Dhabi and India.

In 2006 one of Britain's largest architectural practices and engineering designers, BDP, decided to grow its international business relying on its extensive experience in sectors such as education and retail. Expansion has been driven by acquisitions in the Netherlands and Abu Dhabi and by the creation of an Indian subsidiary. BDP’s approach combines architects with engineers, designers and urban planners in one practice. Its sustainable designs appeal to clients such as Ikea and have helped secure contracts to design 10 new universities in Libya. Overseas sales have grown 74% a year, from £5.5m in 2007 to £16.5m in 2009."

The league table highlights companies that have succeeded abroad despite difficult trading conditions and after tackling challenges ranging from currency fluctuations and language barriers to security risks.

Peter Drummond, Chief Executive of BDP, said "I’m enormously pleased that BDP has featured in the Sunday Times International Track 100 which reviews British companies who are developing a strong international profile. It is a great reflection on our international strategy and the tremendous efforts that many in BDP have contributed in this area of growing importance to us." 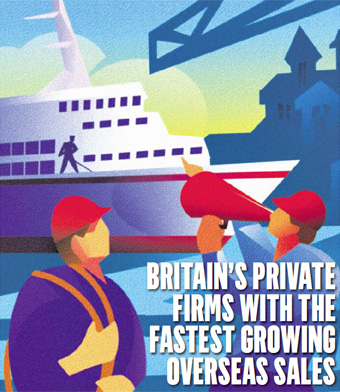