BDP collected two prizes in the RIBA Awards, announced in the various UK regions last night (19 May 2010).  The awards are held annually to celebrate buildings of the highest architectural standards and make a substantial contribution to the local environment.

Cardiff Central Library is a major new civic facility built as part of the wider retail-led St David’s scheme. It forms an important reference point both physically and visually, and places the users and staff at the heart of the design philosophy.

The jury said: “This is a bold and colourful building at the convergence of two pedestrianised streets. The ground floor foyer to the library is appropriately modest, so as to encourage the use of the escalators that rise through a lofty linear atrium - a theatrical arrival sequence that allows the visitor time to take in their surroundings and orientate themselves.  At the very top, the library is crowned with a warm timber ceiling, laid out on a grid that cuts across the atrium and reinforces building planning which is dynamic and sophisticated.”

The Grade II* listed Navigation Warehouse was in a state of dereliction and partial collapse after lying empty for over 25 years. BDP repaired and converted the building to provide multi-tenanted office accommodation on the three upper floors with bar and restaurant uses on the ground floor. The project combines best conservation practice with meticulously detailed contemporary design and is seen as an icon for the regeneration of the Wakefield Waterfront.

The building was praised by the RIBA who said ”The external walls of the interface building have been faithfully reconstructed, but the inside is an elegant contemporary intervention which provides the elements needed by office occupation.”

BDP Chairman Tony McGuirk said: “These awards are testimony to the diversity of buildings we design. This is great news for the teams in our London and Manchester studios and many congratulations go out to them.” 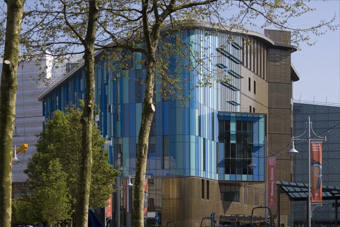