BDP has completed a masterplan study in Samara, the sixth largest city in Russia, won against strong international competition earlier this year.

With a population of 1.2 million Samara is located at the confluence of the Volga and Samara rivers. It has a proud history and was identified during the Second World War as Russia’s second capital in the event of the fall of Moscow. The Samara Center sits at the heart of the city and occupies over 32 ha of former industrial land.

The residential-led masterplan creates a new mixed use destination and comprises 5,000 apartments, a 300 place kindergarten, retail and leisure, mid-rise office buildings plus a hotel and central administration building creating a total GBA of some 700,000 sq m. The client presented a challenging brief requiring a residential density of 500 apartments per ha and a minimum 4 ha of open green space.

The masterplan responds through the creation of a series of landscaped courtyards focusing onto the central park opening up views and enabling all important sunlight penetration. Strong perimeter residential blocks define the plot boundary rising in scale towards the key city approaches. Two new civic spaces are created, one a new arrival point from the proposed metro connection, the other, an important gateway linking the new bus interchange to the retail and public buildings with the focal park space beyond.

The site, near to the highest point in the city and close to the impressive Volga river, demanded numerous massing studies to determine the optimum skyline for this new district of the city. 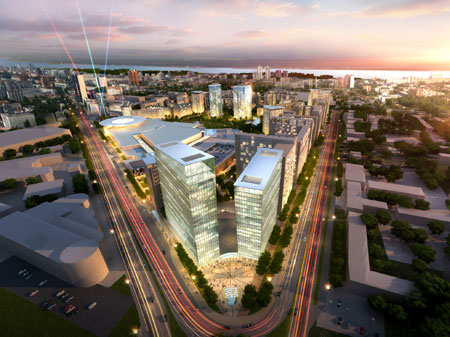