Last evening (18 May) the RIBA Awards for Architecture 2011 were announced at a number of ceremonies across the UK. It was announced that BDP has won two RIBA Awards, both for new university projects, the new Campus for the University of York at East Heslington, and the University of Wales, Newport City Centre Campus.

The new campus at York comprises new accommodation for three academic departments; computer science, law & management, and theatre, film and TV; a shared hub building, and accommodation for 600 students, all designed around the concept of a new living and learning community with each element creating a sense of place and human scale.

At Newport the new campus building realises the University’s important role in the social and economic regeneration of the city and its region. The building occupies a highly visual waterfront site, bringing together Business, Technology, Art, Design and Media disciplines into a single collaborative environment under one roof.

BDP Chairman Tony McGuirk commented on the awards: “It is a particularly important reflection on our pre-eminent position as the UK’s leading designers of buildings and places for learning in particular universities.”

Also last night at the AJ 100 Awards ceremony in London, Tony McGuirk picked up the award for BDP as this year’s 1st place practice in the AJ table of Top 100 Architectural Practices in the UK. “This is the second successive year BDP has won this coveted prize and the 9th time in the last 10 years. This is a great reflection of the practices resilience during times of economic volatility.”

“These awards come within the same week as our competition win for a new university town in Mandi in the Indian Himalayas Region. It has also been timely coming just one week before our opening of the exhibition at the RIBA in London to celebrate the start of BDP's 50th birthday year.” 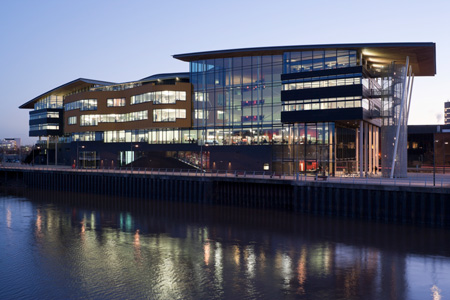