Plans for a £50 million regeneration of Plymouth Argyle Football Club’s Home Park ground have been given the go ahead.

BDP’s scheme, for the Akkeron Group which took over the club in 2011, provides a leisure led mixed use development including a 1,500 seat ice arena and new south stand to the football stadium as well as revamped hospitality and player facilities. A new four star hotel, a ten screen cinema, and retail and cafe outlets are also included. These elements will be linked by areas of high quality public realm which reinforce existing pedestrian links to the surrounding city.

The scheme restructures the site to provide a gateway from the city centre into the Millbay and Stonehouse areas of Plymouth via a new boulevard running to the north of the site.

Akkeron Group Chairman James Brent said: “The new facilities will enhance pride and aspirations for the city, and the development will help put the club on a more sustainable financial footing.”

Work is expected to start immediately with completion programmed for 2015. 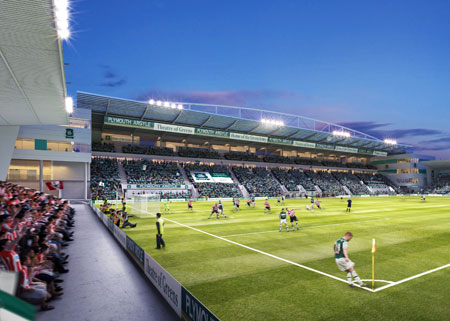