The University of Central Lancashire (UCLan) has renamed one of its schools as ‘The Grenfell Baines School of Architecture, Construction and Environment’ after BDP’s founder. Professor Sir George Grenfell Baines studied at the Harris Institute, which later became UCLan, from 1922-1928.

At a special signing ceremony the new school was officially launched by Lady Milena Grenfell Baines who gave a fascinating insight into her late husband’s early career:

“George was 14 when he left school because of his family’s humble circumstances and went to work in a land surveyor’s office. He was quickly recognised for his architectural talent and moved on to the County Hall where he excelled in a position as a junior draughtsman. It was during this time that he studied at the Harris Institute and it would have made him immensely proud to learn his former college was honouring him in this way.”

UCLan Vice-Chancellor Malcolm McVicar added: “George had tremendous passion, drive and talent and this institution, though its former guise as the Harris Institute, gave him a chance to fulfil his potential. As a University we have always believed in giving people opportunities, regardless of class or financial circumstances and we think George is a great role model for all our students.”

Through the establishment of BDP Sir George became the first architect to recognise that the technical complexities of creating new buildings and environments required a new type of organisation to design them. His solution was to create a practice in which teams with many professional skills could work together with mutual understanding and respect for each other’s design contribution. His philosophy and ethos centred on interdisciplinary working within the architectural, construction and environmental disciplines.

The new school’s BSc (Hons) Architecture programme, which was introduced in 2008 and thought to be the UK’s first for 10 years, recently received official accreditation from the Royal Institute of British Architects. 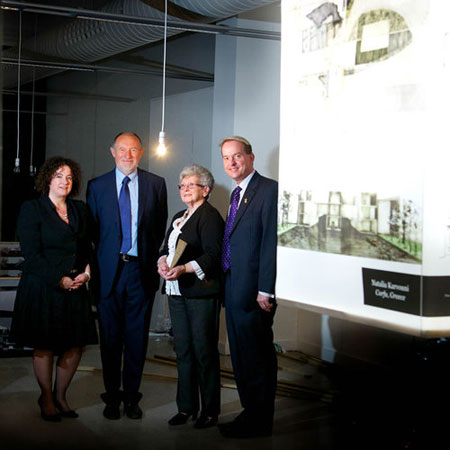