The Halifax Building, built as the head office of the Halifax Building Society, has been listed by Heritage Minister Ed Vaizey at Grade II for its bold and clever design. This is the first time a building designed by BDP has achieved this status, which marks and celebrates a building's special architectural and historic interest.

BDP was commissioned for its design in 1968, and it was opened by the Queen in 1974. The English Heritage report concludes that the Halifax Building is “a remarkable office building; its striking design arises out of the particular innovations in its structure and planning. It fully deserves designation in the national context.”

Their recommendations for its Grade II listing were not only for its architectural and design interest, but also as the supreme commercial building designed by BDP, the largest interdisciplinary practice which dominated the design of commercial buildings during the 1970s. It was also acknowledged for its well considered planning based upon Burolandschaft principles to provide a more collaborative and humane work environment.

The building was highly-praised and drew attention both here and abroad. It was awarded a RIBA Award for Architecture, which praised its 'truly Victorian self-confidence'. The building also garnered many comments, both positive and negative. The Architects' Journal (12 June 1974) referred to it as “A splendid yet alarming building … from a distance curiously sympathetic to the environment which gave it birth”. More recently, architectural writer Owen Hatherley described the Halifax Building as “Genuinely one of the most unbelievable post-war buildings in the country.”

For full details on the listing visit
http://list.english-heritage.org.uk/resultsingle.aspx?uid=1408195 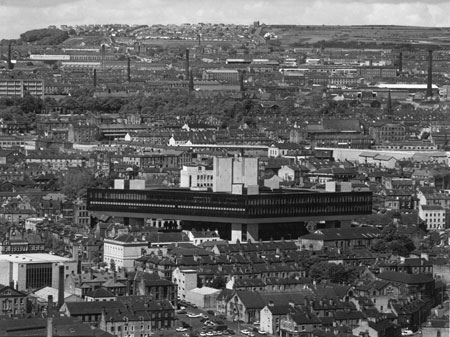