Boxing academy gets the go ahead

The Fight for Peace charity has received planning permission for the redevelopment of its London Academy in Newham. BDP has designed the new building which will provide state-of-the-art training studios for boxing and martial arts as well as teaching spaces for personal development.

The charity targets the hardest to reach young people in the London borough helping them attain their full potential by providing a sporting and educational alternative to crime and violence. The academy was established in 2007 in Newham as gun and knife crime affected more young people collectively than anywhere else in the city. Since opening the academy has seen more than 2,000 people through its doors.

The building is designed to express a distinct identity while supporting internal connectivity. The importance of informal interaction is underlined by avoiding double banked corridors and instead allowing small pockets of interaction to form around the central naturally lit space. The top floor studios will be used for learning and study, where users can find quiet space away from the busy training studios.

The clear orientation of the building together with the visibility of students’ activities will give the users confidence and a sense of belonging.  The ground floor of the building is largely glazed in order to promote transparency, allowing views towards each of the diverse activities and through the training studios.

The Fight for Peace charity held a high level networking event on 14 November 2013 at 11 Downing Street to set out a long term vision for the organisation. Architect director at BDP Wayne Head attended the event, which was hosted by the Chancellor, George Osborne. 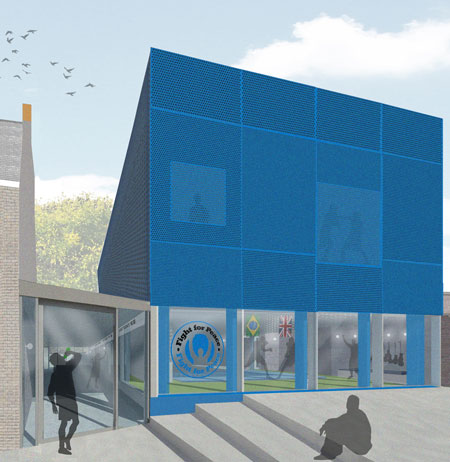