BDP has won the Düsseldorf Ulmer Höh design competition to redevelop a former prison site in Germany. BDP’s Dutch studio was up against five German practices for the 5 hectare mixed use urban redevelopment project.

The site is contained within a city block and incorporates mature trees and historical buildings. BDP will use these qualities to transform the enclave into a lively city neighbourhood.

The existing city block structures are repeated along the site’s perimeter, seamlessly connecting the new quarter with the city. Inside the perimeter blocks, where the prison complex stood, a green oasis will be created from which all the new homes will benefit. It will be a very special open green space within an otherwise densely built-up area.

Of the huge prison complex, only the chapel building will be retained. It will be converted into a community centre and become a meeting place for the new residential quarter.

The jury was impressed with the way the imprint of the prison was incorporated into the design of the public realm. According to its report, BDP’s design puts quality and atmosphere above commercial efficiency. 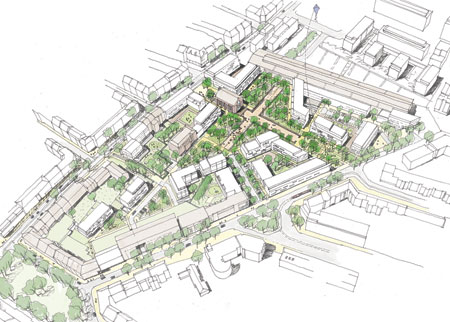