The refurbishment of the East Wing of Somerset House in London has a royal opening by HM The Queen and the HRH The Duke of Edinburgh today (Wednesday 29 February 2012), fulfilling a 180 year long ambition of the College to acquire the building, and gives it a significant front door to the Strand Campus.

This Grade I listed building has been called one of the great architectural treasures of the UK and Europe.  It has spacious original interiors and a number of magnificent stone staircases that were in critical need of refurbishment.  BDP’s conservation architects were appointed to carry out this work.

Tim Leach, architect director and head of BDP’s heritage and culture team said” Multiple alterations and extensions had been implemented since its original completion and had resulted in a building that lacked clarity. The primary intervention has been the significant reordering, for clarity of access by re-establishing primary visual axes, and inserting new lifts to improve vertical connections.  Missing elements of the cantilevered staircase have been rebuilt using traditional techniques while the framework for future links has been created in order to connect the front door through the East Wing and into the campus at several Strand levels.”

BDP faced significant challenges to bring the building up to current environmental and technical standards.  Furthermore the building has now been designed to achieve BREEAM Excellent, a major achievement within the constraints of the Grade I listing.  Modifications have been made to accommodate the demanding servicing requirements, using the existing fabric to achieve a mixed mode ventilation system which responds to the technical requirements but works with the limitations of the building.”

The new accommodation in the building is on six floors – the ground floor is primarily exhibition space for Somerset House but also provides a link between the courtyard of Somerset House and the King’s College London campus and is a space for public engagement with cultural and artistic uses plus a café. The first floor has conference space and seminar rooms filled with state of the art technical equipment and will host conferences and symposia, raising the College’s profile with an international audience.

Floors second and third, and part of the lower ground floor, will have the brand new facilities for the School of Law which moves from inadequate premises in the Strand.

The second basement contains some additional academic space and also houses Somerset House’s Learning Centre for which the Sorrell Foundation is the principal sponsor.

During the refurbishment process Saxon and Tudor foundations were discovered which are now exposed, with a glass floor and bespoke lighting.

Also part of the brief specified roof insulation, but as traditional methods were not suitable due to the increased weight ‘phase change’ materials were used - probably for the first time in a historic building. 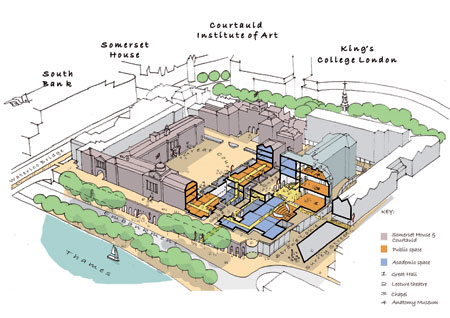